I’ve just returned from 10 days in Greece – more specifically the island of Lesbos. We were invited by a friend to spend a week on his sailboat. He lives the life: 6 months of the year sailing around the Greek Islands. We arrived in the evening in Mytilene, the capital of Lesbos, and spent the next 7 days sailing around the island, anchoring in deserted coves with transparent blue water.

While this was the perfect way to disconnect from the world (quite literally), it was not optimal for tasting the widest range of Greek foods. But I think I got to the essentials, starting with Feta.

I have never been a fan of feta, but I have been converted. Our friend informed us that you must buy feta by weight from a deli or cheese/dairy store, and the difference is incredible. It’s creamier with a delicious tangy flavor. It goes perfectly with fresh tomatoes and a healthy drizzle of extra virgin olive oil (also a major Greek production, and you can see the hillsides covered with olive trees) and, of course, some fresh bread to soak it all up. The produce we found, even in the tiniest of towns, was incredible. This was lunch every single day (and I do not exaggerate) and I was not complaining about that!

Then there is the famous Greek Yogurt. At 10% fat content it’s definitely a splurge, but oh my is it tasty!

With some honey mixed into it…

It’s very rich and it melts in your mouth like butter. They have many flavors in the supermarket, but the classic, plain with honey is the traditional way to eat it. They even served this to us on the plane leaving Athens, though they served the lighter version, which I believe only has 2% fat content. Though it’s not as ridiculously decadent, it’s still rich and creamy. If nutrition labels did not exist, I could eat this every day.

When we did arrive in a port, the towns were very small and we took to wandering the streets looking at the shops. This could become overwhelming because of the extreme heat, the traffic, and the fact that the language makes them sound like they are yelling at each other all the time. However, if you stop one of them to ask directions, all you have to do to win them over is say “good morning” (calimera) and they will do everything in their power to help you out. Seriously friendly people.

The bakeries have all kinds of delicious looking things in the windows. Ah, the temptation of pastries…

These little cookie sandwiches are butter cookies – I’m not quite sure what the filling was in the white one, it was sweet, but the taste of sesame seeds made it hard to distinguish the filling from the rest. Delish nonetheless. The one with chocolate sprinkles had an orange jam filling. Also delish.

Then there’s the national obsession…

The Frappé. I’m not sure when this started, or how, but everyone is drinking them at all hours of the day, whether that be while driving a scooter, laying on the beach, or walking down the street. An iced coffee with foamed milk on top is tasty and a refreshing way to consume your caffeine in such a hot climate. And I have to say, if I lived in Greece, I would jump on the bandwagon pretty quickly.

Getting to sail around this island, spending our days anchored in little coves and diving off the side of the boat any time we felt like going for a swim was truly an ideal way to start our summer vacation.

But no trip to Greece would be complete without a day in Athens! 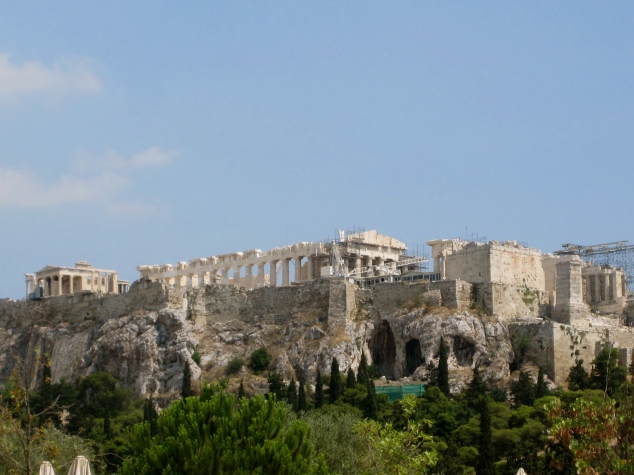 We spent our last day in Athens, where it was unbelievable hot. But, we powered through the heat and got the chance to tour the city and see the ruins of the Hadrian Library and the Acropolis. But, before setting out on a several hour long tour of the city, lunch. Gyros, in fact.

Incredible. This restaurant in Monastiraki Square was selling beef, chicken and pork gyros by the dozens to tourists and locals alike for only 2.50 euros. Fresh pita, still hot and fragrant, topped with cool tzatziki.

And with an ice cold pint of beer to beat the heat. With that we were ready to tour! Athens is probably the busiest and noisiest city I’ve ever visited – then again, maybe it was the fact that I had just spent 7 days on a sailboat in open waters… Regardless, it was worth fighting heat stroke to get the chance to be in the presence of ancient history.

All in all, a beautiful country, with wonderful people and delicious food.